I am pleased to share a new paper on child protection and exploitation in refugee camps in Rwanda, published in the journal, Child Abuse & Neglect, a top-ranked journal for social work and public health practitioners and policy audiences.

The paper, titled “It isn’t that we’re prostitutes”: Child protection and sexual exploitation of adolescent girls within and beyond refugee camps in Rwanda, draws on data from a baseline study from a collaboration with Plan International in advance of a project they were developing focused on empowering female adolescents in two refugee camps in Rwanda.

Findings from this qualitative study centered upon intersectionality. Camps designed for security and containment also introduced new forms of vulnerability and threats. Economic stressors threatened the viability of families. Girls had material needs but few options to meet those needs within the camps. Their families expected them to do domestic work at home. Participants reported that the convergence of material deprivation, lack of economic opportunity, and vulnerability led to transactional sex and exploitation within and around the camps. The study concludes that vulnerabilities and threats associated with gender and generation must be examined concurrently with the conditions associated with being a refugee in a setting of protracted displacement.

This paper wouldn’t have been possible without Plan’s support, along with the contributions of the two co-authors of the study, including Vidur Chopra, a postdoctoral fellow at Harvard and expert in refugee education, and Sharon Chikanya, who led the coordination of the Plan International project.

This paper was a neat offshoot of the baseline study, illustrative of the way that NGOs can work with researchers to advance evidence-based programming and advocacy.

For most of this year I’ve been working once again as a researcher with the Effective States and Inclusive Development (ESID) Research Centre. ESID is a DFID funded program based at the University of Manchester within the Global Development Institute (GDI), Europe’s largest global poverty and inequality institute. This is the same program I worked with in 2015 and 2016 when I led on study on the political economy of education quality in Rwanda. This time around I’m focusing on the implementation of social protection policies. Social protection can be understood as policies and programs are considered those that are designed to reduce poverty and vulnerability and improve capacity.

The study looks at factors that shape the implementation of social protection efforts at the local level. Rwanda’s approach to governance seeks to have national-level policies and priorities delivered in a fairly uniform way. But factors such as decentralization, local selection of beneficiaries, and performance contracts allow for some discretion into the ways in which policies are implemented. For this reason, we are looking at what factors may be present to explain local variation and decision-making processes.  As such, this study will seek to shed light on the following question that guides ESID’s broader work: “How do state-society relations shape the implementation of social protection and how, in turn, does implementation transform these relations?”

ESID is very pleased to partner with the Institute of Research and Dialogue for Peace to carry out this study. IRDP contributes to the building of sustainable peace in Rwanda through participatory action research, the promotion of a culture of debate and dialogue on issues related to peace, and by sharing experiences with other peace initiatives.

I am thrilled to announce that my paper on education policy in Rwanda was selected as the co-recipient of the 2018 Joyce Cain Award from the Comparative and International Education Society. The award is given to recognize “an outstanding scholarly article that explores themes related to people of African descent.” Dr. Cain was a teacher, researcher, practitioner, and international scholar. She was a forerunner in conducting comparative research on minority students in the USA and Africa. I was given the award for my article, “The political economy of primary education: Lessons from Rwanda” which was published in the journal World Development. I gave a few remarks at the awards ceremony in Mexico City:

It is such an honor to be selected as a recipient of the Joyce Cain Award. I want to thank the Committee Members and to offer a few brief reflections from my paper.

The 2018 World Development Report drew attention to the global learning crisis. My paper sought to shed light on an aspect of this crisis that often hides in plain sight. That is, education policies are not always introduced with the expectation that they will improve learning.

It is fairly easy for leaders to make the case for improving access. Building classrooms tend to be straightforward, visible, and popular. But improving education quality is more difficult than building classrooms. It is less visible and can be more expensive. It can mean fighting powerful teachers’ unions or shifting budgets away from other priorities.

Each of these things can mean losing elections. Thus, contrary to what we might expect, education policies may be not always be introduced with the expectation that learning will improve.

My paper applies this perspective to look at the politics of education quality in Rwanda. In doing so, I hope to draw attention to the importance of understanding how political factors shape policy. In absence of quality, children may find themselves in an unenviable position: included in the education system, while excluded from meaningful participation, given the poor quality of that system.

I am proud to say that I can count a couple of the Joyce Cain Award’s past recipients as among my closest academic mentors, including Theresa Betancourt and Sarah Dryden-Peterson. I would also like to extend my gratitude to those who have been supportive of this research: Sam Hickey and Naomi Hossain at the Effective States and Inclusive Development Program at University of Manchester, Valens Rutazihana for his research assistance, the interview participants in this study, and the Joyce Cain Award Committee members and fellow nominees.

This is one of the most important articles from the research I’ve been doing about Rwanda’s education system since I started working on this issue nearly a decade ago. The paper is titled ‘The things they learned: aspiration, uncertainty, and schooling in Rwanda’s development state.’ It draws on the passionate voices of children and teachers to look at local experiences of education policy and to consider implications for the government’s state-building project. The bottom-up perspective in the paper serves as a complement to the top-down political economy lens focused on this same issue published in World Development last year. 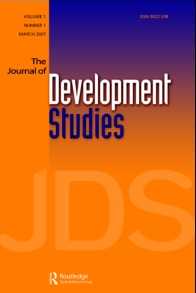 The title of the paper was inspired by Tim O’Brien’s classic book, “The Things They Carried” in which the author narrates the deeply personal experiences of soldiers through the material possessions they carried within them to war. Informed by this perspective, this paper offers an account of what children learned—i.e., how they thought about themselves and their futures—through their experience of school and in a context in which the future felt far from certain.

The Journal of Development Studies publishes about 11 percent  of the 1,100 submissions it receives each year.

This paper, titled, ‘The political economy of primary education: Lessons from Rwanda’, was published in the August 2017 issue of World Development. The paper draws on in-depth policy analyses to better understand why education quality in Rwanda remains so low, despite the government’s strong commitment to developing the country.

World Development is the top-ranked journal development studies. It publishes about 9 percent  of the 2,300 submissions it receives each year. Coverage of the article can be found here and here. The Manchester research that informed the theoretical arguments made in the paper can be found here. Study findings were presented for the Development Studies Association conference in the UK, the Comparative and International Education Society annual meeting in Canada, and for education stakeholders in Rwanda.

For the past couple of years I have done some research for the Center for Universal Education at the Brookings Institution. I worked alongside other leading experts in education and development to develop research focused on mobilizing global efforts to improve education quality and skills acquisition. This work entailed extensive data gathering, case-study writing, and co-authoring reports, including this one on education, innovation, and skill-building for Brookings’ Global Economy and Development Program.

When it comes to the delivery of services to the poor, politics matter. This paper applies a political settlements framework to approach the study of primary education quality in Rwanda. In recent years, the government of Rwanda has received recognition for its commitment to expand education for all young people. But the drivers for improving quality have been less straightforward. Through process tracing from national to local levels, this study investigates the interests, institutions and incentives for improving the education quality. Findings suggest there was a stated commitment to educational quality on the part of the government across all levels. At the same time, the country’s decentralized system of governance has deconcentrated implementation responsibilities to local government and schools. Performance-based incentives at the local level focus on aspects of quality that are measurable — i.e., through the construction of classrooms and provision of materials — rather than on improving the capacity of the teaching workforce or tracking learning outcomes. The incentives and ideas that drive the behavior of key actors in the education sector allow us to consider the degree to which state capacity and elite commitment can be sustained.

The project was part of University of Manchester’s Effective States and Inclusive Development program. ESID is committed to deepening the understanding of governance in the developing world in ways that impact on policy and practice in order to improve people’s lives and livelihoods through development. ESID is based within Manchester’s Global Development Institute (GDI), Europe’s largest global poverty and inequality institute. ESID research is funded by the UK Department for International Development (DFID).